← back to
Whirlwind Recordings
Get fresh music recommendations delivered to your inbox every Friday.
We've updated our Terms of Use. You can review the changes here.

'Fistfight at the Barndance' - Album Trailer

Fistfight at the Barndance 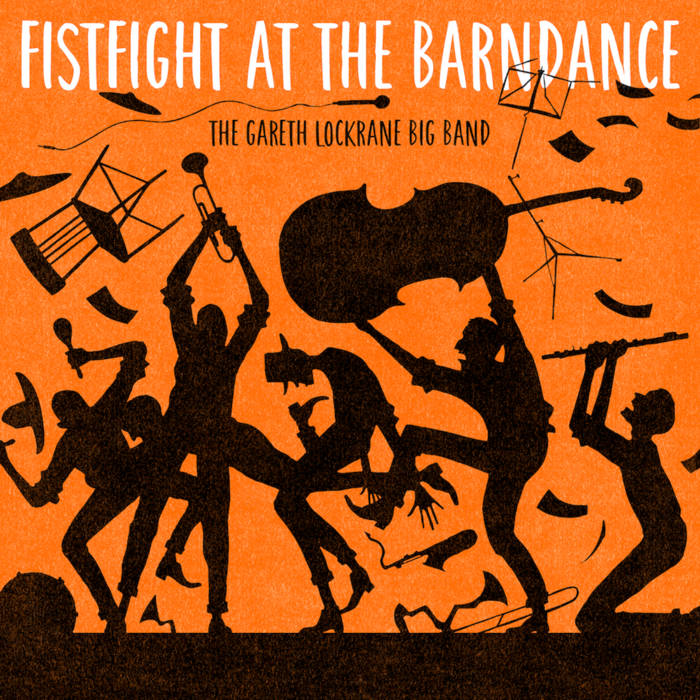 Sven B. Schreiber (sbs) You might have already noticed that I'm the target of some strange attraction originating from big band music. Yes, seriously... but not from any kind of... well, it must be complex, polyphonic, boldly arranged - and a little bit dissonant at times, if possible. Ideally, it should be without improvisations, but that's a very strong condition that's rarely met, since big band music typically is a sub-genre of jazz. So, long story short - "The Gareth Lockrane Big Band" is an ideal match - besides featuring lush wind arrangements that really floor me, the interspersed solos on this album even manage to be an enrichment to the tracks, rather than a plague I'm hoping to go by soon. Favorite track: Do It.

In his most ambitious artistic undertaking yet, respected British flautist, composer and educator Gareth Lockrane brings his debut big band project to Whirlwind to interpret eleven original works on an exciting, cinematic scale in Fistfight at the Barndance. Known for his considerable work with smaller ensembles such as Grooveyard (with saxophonist Alex Garnett), as well as being a familiar sideman on the UK scene, here Lockrane distils all of his experience into leading a 20-piece which sparkles with ebullient expression.

Ellington, Basie and Mingus, as well as saxophone/flute doublers such as Frank Wess and Eric Dolphy, formed the basis of Gareth Lockrane’s early-career interest in this larger format, leading to arrangements for the Royal Academy of Music and the National Youth Jazz Orchestra; and it was his degree in film composition, working with varied, expansive movie narratives, which heightened the ambition to paint on a broader canvas. He describes the rich diversity of the assembled musicians: “There are contemporaries of mine from college, including Steve Fishwick, Henry Collins, Sammy Mayne and Mike Outram; some of the players, such as Ian Thomas and Mark Nightingale, were pillars of the scene when I originally moved down to London; and then there are the younger musicians I taught at the RAM – for example, Tom Walsh, James Gardiner-Bateman and Nadim Teimoori. So I feel a great connection with this extraordinary bunch of guys from across the generations; and with so many fine soloists amongst them, it’s satisfying to provide each with the opportunity to shine”.

The album title is a tribute to Lockrane’s late father, whose 6/8 blues harp riff of the same name (in which he jocularly envisaged the implosion of a convivial barndance) is the basis for the call-and-response between flute and brass at the centre of the title track’s bustling maelstrom. Pianist and organist Ross Stanley’s commanding soul-jazz Hammond grooves are often at the heart of the leader’s creations (influenced by the likes of John Scofield, Eddie Harrris and Behki Mseleku), including high-energy ‘Stutterfunk’ with Ryan Trebilcock’s pulsating electric bass inspiring sassy horn licks and effervescent flute and sax improv, and country-blues rock-out ‘Roots’.

Each tune on the album has its own history, the big attraction for Lockrane being the weaving together of all kinds of influences – gospel, funk, straight-ahead jazz, soundtrack – as well as the challenge of harnessing and pacing the potential power of a big band: “It’s about sustaining a mood and arranging the sounds so that every moment counts, while also allowing each section the opportunity to enjoy the freedom. And my own role is intentionally quite loose, playing off the band or ducking around inside the arrangements as a middle-man between the rhythm section and the horns”.

As an instrumentalist, Gareth Lockrane is a proven master, here adding an orchestral sheen which evokes classic movie scores of the 1960s and ‘70s, especially when using contrabass and subcontrabass flutes – so ballads such as ‘We’ll Never Meet Again’ and ‘Forever Now’ might easily conjure the evocative sound worlds of Bernard Herrmann or Henry Mancini as his deep, breathy sonorities blend imaginatively with the band’s lush, textural harmonies. Sizzling reinterpretations of earlier compositions are juxtaposed with a clutch of new tunes. ‘Do It’ possesses an edgy, nightlife swagger; blithe, streetwalking ‘On the Fly’ and ‘Mel’s Spell’ (after Mel Lewis, a distinct inspiration after seeing him in the Village Vanguard band, NYC) superbly showcase Lockrane’s flighty, higher register against his sumptuous arrangements; and exhilarating boogie ‘One for Junia’ increasingly ramps up the fervor.

Recorded in London across a single day – and mastered in New York by the esteemed Tyler McDiarmid – it’s a strong, confident statement by an amazing collective, also recounted by Gareth Lockrane as a warm, rewarding experience: “We’ve done so many great gigs, it’s great to now definitively document our achievements. I always wanted to do a strong studio big band album that was loose enough for the solos to be fresh while doing justice to the tunes (and with the right people playing them). It’s been hugely enjoyable to put together”.

​"The band has power to spare... Repeated listens reveal the subtlety not only of the writing but also of its realisation."
Jazz Journal​

“A dazzling display of technical prowess in writing, arrangement and performance... a joyous recording.”
Jazz Views

"78 minutes worth of exuberant, joyful, upbeat straight-ahead jazz – even the ballads can’t contain themselves for long before a foot tapping beat breaks out."
Sandy Brown Jazz

“A diverse yet cohesive modern take on the bebop tradition.”
Radio REC